5 Tips to Bag a Mountain Gobbler

The southern Appalachians can be a challenging place to bag a bird. Birds can be difficult to predict and the terrain is challenging, to say the least. I’ve spent a lot of time navigating the mountains of the Blue Ridge, mostly in the vast 750,000 acre Chattahoochee National Forest near Dahlonega, Georgia. Here are 5 tips to increase your chances of nabbing a thunder chicken in the mountains.

Turkeys roost on the ridges, often times above moving water. Your best bet is to get up on the ridges where you know they roost well before daylight. Locate the birds on the roost with an owl hoot or a crow call. Once you’ve located the birds, set up where you think they’ll fly down and wait until they hit the ground before you call. 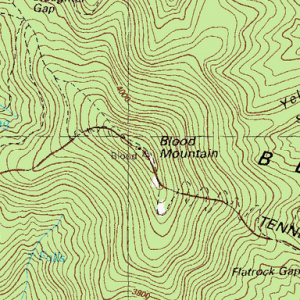 A topographic section of the Blood Mountain Wilderness near Blairsville, Georgia

You better not even think about heading out to the mountains to hunt unless you can read a topographic map, or just know the terrain where you’ll be hunting. Oftentimes something that appears to be a mere stone’s throw away can be a mile away down a steep ridge and up another. In some cases the terrain can be so steep that it’s impossible to ascend.

Think you need that second longbeard decoy or that extra box of shells? Think again. Every ounce counts when you’ve got to haul your vest, shotgun, and self from 1500 to 4000 feet above sea level within 2 miles. You might also want to reconsider that hamburger and french fries from McDonald’s. Those extra pounds will do you no good when trying to make it to the top of a ridge before daylight.

This kind of goes along with the previous point. Climbing mountains is hard work and you need to be in peak physical condition in order to get where the gobblers are. Lose the extra pounds and get in good cardiovascular condition before the start of the season or you’re going to struggle and miss out on opportunities. There are plenty of barriers between you and that turkey. Don’t let your physical fitness be one of them.

Scouting is always essential to a successful turkey season especially if you hunt public land. Start a couple weeks before the season. Hike trails that run along the ridge lines and be on the lookout for feathers, tracks, scratching, etc. Sometimes you won’t be able to locate the turkeys until a couple of weeks after the season starts. Mountain birds are often hesitant to gobble until late March or early April.  So if in your pre-season scouting you’re unable to get on the birds, be patient! 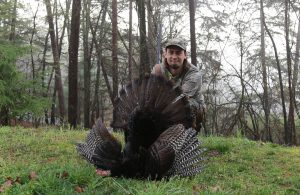 Me with my first mountain gobbler harvested on private land near Turners Corner in Dahlonega, Georgia

Hunting turkeys in the mountains can be difficult, but, in my humble opinion, more rewarding than killing a bird on flat ground. Conquering the terrain and braving the elements that the mountains throw at you to bag a bird is one of the biggest thrills you can imagine. North Georgia has plenty of public land for everyone. Very soon you’ll be able to check out some hunting tracts in North Georgia on The Southern Land Brokers website. That’s right. The Southern Land Brokers are crossing state lines and will also be selling land in Georgia.

Try your hand at hunting in the Appalachians this Spring!